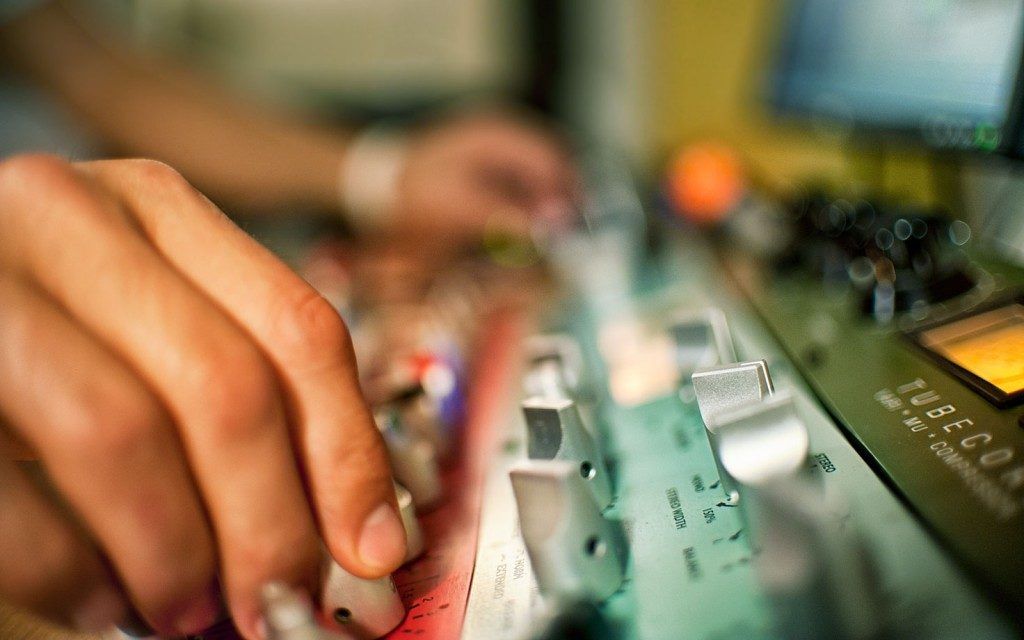 Whether it is commercial music or audio for other purposes such as movies, you can be sure that the audio has been through quite a long process of being created, recorded, edited, mixed and finally, mastered. While the creation of music by artists still remains the most important element of the process, the music would not exist on record without the behind-the-scenes work that goes on to release this music in many different formats which can be played on modern technology.

Step One – Rehearsing And Recording Audio In The Studio

Once the audio is rehearsed and recorded, it then goes to the next stage of the process; audio editing.

Nowadays, audio editing is mostly done on the computer using a Digital Audio workstation (DAW) by an experienced sound engineer. This process ensures that the audio is “cleaned” up and allows for the editing of any flaws such as clicks, crackles, hums and hisses.

A digital audio workstation is commonly found in many audio editing facilities and is the centre of the mixing or mastering studio. It will usually be a desktop computer with a graphic user interface (GUI), at least one mixing console, a control surface as well as an audio converter and data storage. DAW is the interface where all your equipment is connected and all your files are stored and its primary job is to simulate studio equipment.

Most of the audio editing is performed using software such as Avid Pro Tools, Steinberg Cubase, Steinberg Nuendo and Logic Pro.

This prepares the audio for the next phase of mixing which is done by a mixing engineer.

Choosing the right mixing engineer is extremely important as during this process, depending on the taste and style of the sound that the client is trying to achieve, there is a level of creativity that can be added. The mixing engineer can add subtle changes to the music and make small tweaks to give it a flavour of a particular style of music.

Once the audio mixing process is completed, there should be no more changes made and this should be seen as the final version of the music. Once everyone is happy with the final result, the audio then goes on to its last and final stage of the creation process and is passed on to the audio mastering engineer.

As this is the first time the mastering engineer has heard the audio, the advantage is that it will be heard with a fresh mind and fresh ears allowing for very critical listening.

This can breathe life into the audio and bring that something special to an already finished mix. By listening to what’s already there in the audio, an experienced mastering engineer can quickly tell what is missing. For this, state of the art equipment is required as well as a good ear and years of experience. By finding out what the emotion, rhythm and vibe of the song is; the mastering engineer can use his knowledge to add depth and colour to the audio and enhance it. Of course, as every piece of audio is different and individual, the creative process of audio mastering can be different for each client.

The mastering engineer will master the audio in his studio using his Digital Audio Workstation (DAW) specifically designed and set up for audio mastering. This has many benefits and allows the engineer to do many different things such as apply noise reduction to eliminate clicks and dropouts, adjust stereo width, add ambiance, adjust volume, etc. Removing any minor issues is usually the first point of call and is done before any other adjustments to the track are made.

If the track contains any faults that may be bigger, sometimes the mastering engineer will need to go back to the mixing engineer and isolate the problem.

The importance of having good quality equipment and monitors is also extremely important at this stage as this allows for a much finer tuning system to find all those little mistakes that previous engineers may have missed. Once the issues are resolved, the creativity can start to flow, which can be anything from changing the EQ, the base or anything else that may improve the quality and sound of the audio.

The mastering engineer can ensure that there is balance throughout all the instruments and no part of the audio becomes overbearing so that there is equality throughout the music. Sometimes the client requires more creativity and sometimes they need more transparency which must be followed down to the ‘t’ to ensure a happy and satisfied customer.

If more transparency is required during the mastering process, then there will be less changes made to the audio and if more creativity is needed, well, how long is a piece of string!

Once the mastering is completed, the engineer will usually go back to the beginning and simply listen to the track to make sure everything is as it should be and sounds just right, sometimes even leaving the track for a few minutes to have ‘fresh’ ears again and really be able to hear any last minute issues.

When the mastering engineer has decided that the audio is the best that it can be, CD markers will usually be inserted along with the International Standard Recording Code (ISRC) and any other information that is needed to replicate the CD.