Why do most studios ask for -6dBFS? 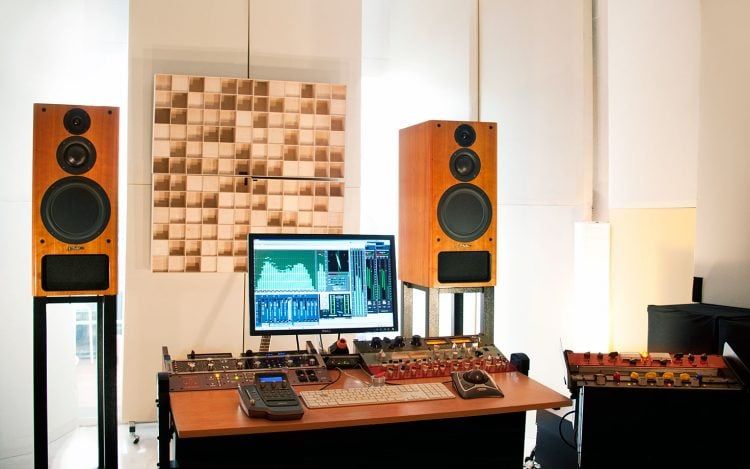 Headroom In The Mix For A Mastering Engineer

Why Do Most Studios Ask For -6dB FS?

“Leave headroom for mastering” is a term that is quite often used in the world of music. Nowadays there are a lot of amateurs in the music industry without sound knowledge of basic concepts around sound engineering. There is a lot of misinformation on the internet regarding headroom, which causes a lot of confusion especially for those who don’t have years of experience in the subject. Here, we aim at clearing some of the common doubts regarding this concept.
Peak Vs Root Mean Square (RMS)
Audio waveforms have the highest point, a midpoint or average and the lowest point. The highest point or maximum is referred to as the “peak”. The maximum peak that is allowed in digital audio is 0 dBFS (Decibels Relative to Full Scale). Similarly, the average point is called “Root Mean Square” or more commonly, “RMS”. RMS lies between the loudest and the quietest portion of the audio.
The importance of RMS is that it measures how loud we perceive the sound to be. As the sound gets louder, RMS draws closer to 0 dBFS. However, the perfect amount of “loudness” for mastering is not solely based on RMS. The difference between the maximum and minimum RMS, known as dynamics, is the best way to measure loudness in digital audio.

What Is A Headroom In The Mix? Peak Vs RMS?

Headroom in digital audio refers to the difference in decibels between highest level “peak” and 0 dBFS. Although very commonly confused, headroom is not between the RMS (average level) of the mix and 0 dBFS. Headroom is a “safety zone”, and it is often advised to leave headroom for mastering. This implies that a finished audio file should peak at some decibels below 0 dBFS, else the task of mastering music becomes very difficult for the Mastering Engineer.

Digital And Analog Clipping? What Is The Difference ?

When a signal recorded in the digital domain goes above 0dBFS (the loudest recordable signal) it results in a “clipped” waveform.
Clipping is a distortion in the amplitude that occurs when the incoming signal cannot be handled properly by the electronics. Distortion across a whole mix is undesirable. It indicates a loss of exactness or “fidelity” of the original recording when it is reproduced.

Almost all audio was recorded and released using analog tapes before the 1980s. Analog clipping occurs when the incoming signal goes above the headroom in an analog tape. Analog electronics can still output the signal, but there will be significant distortion. However, these analog output waveforms are still rounded and sometimes even used on purpose to create a particular effect by musicians. Analog clipping is termed “soft” as it has almost a musical sound.
In digital clipping, the transition to distortion is not smooth and you cannot go past the ceiling. The output after digital clipping is a flat line. Hard digital clipping results in the highest level of loudness, maximum distortion and the greatest loss of bass.

All digitally created music has to be converted to analog before we can hear it. In order to smoother out our listening experience, reconstruction filters are used to round off the digital audio signal. However the drawback is that, these filters can cause differences in audio levels, resulting in clipping of signals close to 0 dBFS. A good quality digital-to-audio converter can handle these inter-sample peaks, but cheap speakers would not have sufficient headroom for it.

How Do You Avoid Intersample Peaks?

The best possible way to avoid intersample peaks is to incorporate a good amount of headroom between the peak levels and 0 dBFS. Intersample peaks can also be avoided by improving metering.
The aim should be for every mix sent for mastering to have minimum distortion.

How Do You Leave Enough Headroom For Mastering?

A mix that is sent for mastering generally lacks headroom because it was mixed “hot” (by setting the meter level too close to 0 dbFS) or if plug-ins were used on the master bus just for loudness.
In order to leave enough headroom for mixing, you must keep in mind the following basics.
As mentioned previously, 0.0 dBFS is the point where clipping starts to occur(in digital domain). Keep the peaks in the mix below -0.0 dBFS.  A good buffer and safe zone is -6dB FS.

Aim for a “fishbone” shape for the waveform so that the transients and dynamics are intact and even transients do not go above -6dB FS.

Do not eliminate headroom by automating volume too early. The best way to start is by adjusting individual faders to achieve a good balance in the mix and then move on to automation.
Keep the volume levels conservative when mixing audio. Mixing Music at loud volumes can result in misinterpretation of the actual loudness of the mix.
The bottom line is, if you steer clear of peaks at 0 dBFS and aim for a dynamic production, a good mix isn’t far away.
One of the most crucial points in leaving enough headroom is to always work in 24 bit (record, mix). Let us discuss the difference between 16-bit and 24-bit files.

What Is Difference Between 16 Bit And 24 Bit Files?

Earlier, all digital audio generators and recorders were 16 bit. Through gradual change, now, almost all digital products are in 24 bit.

It may not make your music sound much better, but it makes it possible to record dynamic music with both very soft and extremely loud parts. Recording in 24 bit gives your audio more room to breathe. This means you can record at low levels with greater headroom. Bandwidth limits are not exceeded, which results in better clarity of instruments and vocals.

Another important difference between 24 bit and 16 bit in digital audio recording is the variance in signal noise ratio (SNR). Signal noise ratio is the level of noise in relation to the signal. For music that is quantized at 16 bit, SNR is low, with the quantization noise just below the hearing threshold. However, with 24 bit audio, SNR is almost double that in 16 bit which is preferred for mixing and recording as it provides a good reserve to work with.
Thus, it is highly recommended that recording is always done with 24 bit as it gives the recording engineer adequate noise floor and headroom.

There are many varied opinions regarding how much headroom to leave after mixing for audio mastering. To add to the confusion, especially for budding sound engineers, there is quite a lot of wrong information being circulated regarding the “ideal” headroom.

In reality, more than sticking to a particular value for headroom, it is integral to always try and record with 24 bit in order to allow for sufficient signal to noise ratio.

It is also important to avoid peaking close to 0 dBFS.

In order to keep a safe zone, –6 dB FS can be considered as an adequate value for headroom though it is not a magic number or gold standard by any means.